Apologetics is the defense of faith, or defense of the hope! Apologists focus their attention on how to justify, defend and vindicate the Christian faith to anyone asking for the reason for faith.

Today we begin our study of the new book in the Bible, the Gospel of Luke, but as you read the first 4 verses of this book, you will make some interesting observation. If you are reading this book in Greek, the first 4 verses are one big sentence. These 4 verses are unique in all of the NT as they are written in the classical Greek of Aristotle and Plato. The style of these verses is parallel to such famous thinker and historian of that time – Josephus! This introduction to the Gospel was supposed to attract the attention not only of the intellectual elite of that time, but also our attention! How? Apologetics!

Today, we will focus our attention on the author, who in these verses acts as an apologist – he gives a kind of protection and justification of the Christian faith, and this is very important to hear for both, people who don’t believe in God, and for those who do.

A true historian will never be proud… and the reason for that is in the fact that he only conveys the merits and success of others.

Luke’s humility can be seen in two aspects of his writings. 1) He speaks very respectfully of others “inasmuch as many have undertaken to compile a narrative…” This is a very respectful attitude towards all who have already tried to describe the life and ministry of Jesus Christ. The fact is that at that time, the authors very often strongly criticized others in order to build up their own authority. Luke, on the other hand, does not build his reputation at the expense of others, but in contrast, says that he is not the first and perhaps not the last. Luke does not ignore or cover up the fact that others have already composed the narratives. It’s like for any preacher now, who might think: “why preach on the Gospel of Luke if a well-known preacher with thousands of YouTube viewings has already preached on this book. But this does not bother Luke, nor stop him from writing this book. He is not the first, not original, he just wants to do his research well and thoroughly document his work.

2) Luke is the author of this Gospel and of the Book of Acts, and he never mentions himself by name. Moreover, he managed to hide himself so well, that little do we know about him! He is not a stage person! He just wanted to be helpful! Even in the introduction, he does not mention his name. We only have a very strong church tradition dating back to the first century attributing this book to Luke!

Having heard such facts about his humility, we are already disposed to listen to what he will communicate.

What information did he use?

He was looking for eyewitnesses, but not ordinary eyewitnesses, but those who really lived by it!!! (v. 2) There is one article in Greek, which means that these are the same people – they were eyewitnesses and ministers of the Word! We can say that their words were lived out by them.

This is a picture of the journalist interviewing people after the soccer game. There were different level of involvement in the game (12, 70, 500).

In addition, he placed very well the story of the life and ministry of Jesus in the context of that time – there are elements of secular history (1:5; 2:1-2; 3:1; 13:1). In order not to miss anything, Luke had to write down the largest by size Gospel.

Luke the historian, is trustworthy! We have an accurate information! Apologetics is built on a clear and historically accurate Scripture!

Luke theologian (vv. 3b-4) – respectful attitude towards the recipient.

A similar title was used with regards to rulers (Acts 23:26; 24:2; 26:25) – most excellent Felix, Festus. Luke did such a detailed research, wrote everything down, and he did it all for one person! Any theologian does not work for the crowd. He always addresses specific people! Theology (doctrines) are for individuals, not books!

Research, and teachings that Luke transfers carry specific information about Christ, to a specific person. The apologist is the theologian who defends the Gospel!

Relationship between the Gospels and the rest of the NT books

The doctrinal orientation of the Gospels

The main doctrine is the cross. Starting from (9:51) Luke devotes 10 chapters to describe how Christ goes to the cross! And it is these chapters that are mostly unique and are not repeated in other Gospels. Most of this book takes place in the shadow of the cross!

But most importantly, it is the doctrine of justification by grace!

(18:9-14) – the parable of the Pharisee and the tax collector praying in the temple

(Col. 4:14) – a beloved physician – treated Paul’s wounds (most likely he traveled with Paul for this purpose).

Medical terminology (14:2) – it could be expected that sooner or later his medical approach would emerge…

In addition, when we study the miracles of Jesus Christ in healing the sick, the details of the diseases given by Luke give away his trade.

The doctor who was a Gentile!

Of particular note is Colossians 4:10-14, where Paul in verses 10 and 11 speaks of three co-workers from circumcision, and then includes Luke in the group of Gentiles (vv. 12-14). In (Acts 1:19), he speaks of “in their own language,” which perhaps says that the author does not belong to this group of people.

When he quotes the OT, it is always from the Septuagint (Greek translation of the OT).

If so, then he is the only Gentile author of any book of the Bible! In addition, this Gospel pays special attention to women, children, people of different social status (shepherds, Mary and Joseph were poor), special sinners (tax collectors, prostitutes)!

A. The angel’s good news to all

B. Simeon says that Jesus will be a light to the Gentiles

(2:32) “a light for revelation to the Gentiles, and for glory to your people Israel.”

C. John the Baptist said that the coming of the Messiah is for all

(3:4-5) “As it is written in the book of the words of Isaiah the prophet, ‘The voice of one crying in the wilderness: Prepared the way of the Lord, make his paths straight. Every valley shall be filled, and every mountain and hill shall be made low, and the crooked shall become straight, and the crooked places shall become level ways, and all flesh shall see the salvation of God.’”

D. The Samaritans are presented equal with the Jews

(4:25-27) “But in truth, I tell you, there were many widows in Israel in the days of Elijah, when the heavens were shut up three years and six months, and a great famine came over all the land, and Elijah was sent to none of them but only to Zarephath, in the land of Sidon, to a woman who was a widow. And there were many lepers in Israel in the time of the prophet Elisha, and none of them was cleansed, but only Naaman the Syrian.”

F. The great commission is directed toward all people

(24:47) “and that repentance and forgiveness of sins should be proclaimed in his name to all nations, beginning from Jerusalem.”

It is in the fact that Luke was a doctor do we notice his loving heart, and at the same time we can learn to love people.

(2 Ti. 4:10) – this is the second imprisonment of Paul, from which he will not be released, but which will end with his execution. And in the very last days of his life, there was no one left with Paul, except Luke!!! This faithful doctors lead his friend all the way to the gates of heaven!

Reading the Gospel of Luke, sooner or later we will look at other people was Luke looked at them – the opportunity to serve Christ and tell others about Christ!

Four hymns-praises or exaltations that only Luke have written:

“Joy” and “rejoicing” are the most common in Luke out of entire NT.

This creates the feeling that Luke was not indifferent to the reaching of people when they came into contact with the Gospel – they praised God! Studying this Gospel, let us remember that this is a historian, theologian, doctor and musician. This is real apologetics. As a result we will be confident in the Scriptures, confident in God’s love, we will love our neighbors and glorify God! 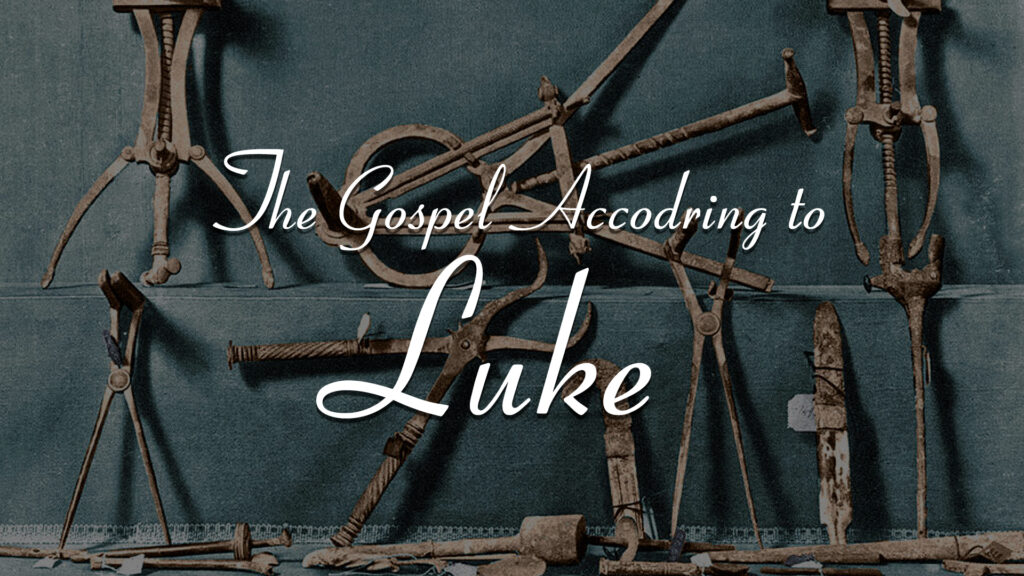 The ministry of the Word of God

The Cure for Judgmentalism

The Gospel vs. Unbelief